The film, music, audio, games and animation students at Pulse College were absolutely spoiled last week, as Emmy-Award nominated Foley Artist & Foley Mixer double team, Caoimhe Doyle & Jean McGrath of Ardmore Sound, set up camp in our recording studio for 4-days to give a seminar on sound effects and post-production. 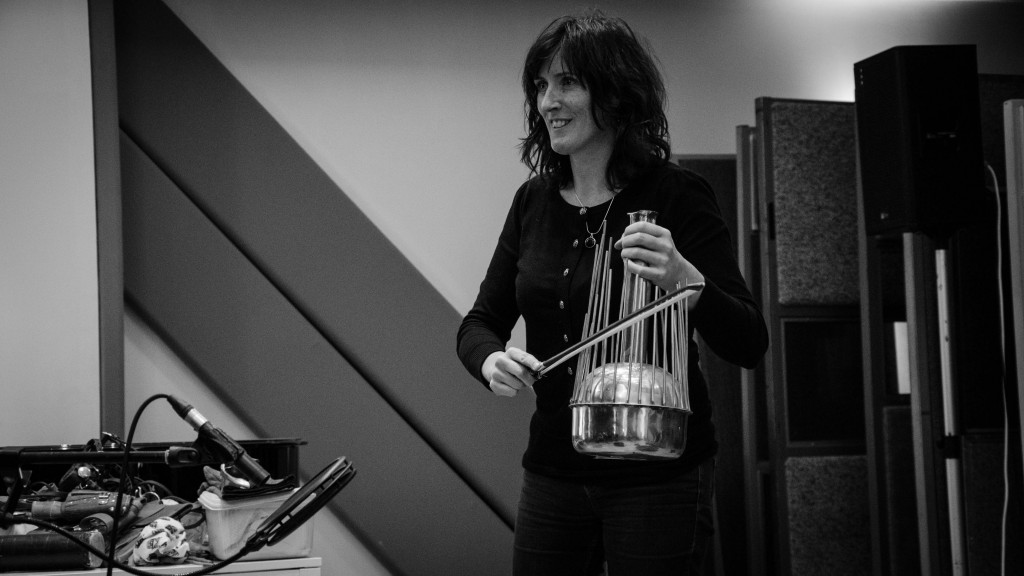 Foley is all the sounds in a movie that are added manually (footsteps, creaking doors, water drops etc) and is one aspect of Film and TV production that audiences often overlook but is vital to a viewers experience. Caoimhe has worked on projects such as ‘The Guard’, ’Knocked Up’, ‘Game of Thrones’, ‘The Tudors’, ‘Love/Hate’ and was nominated for a Golden Reel Award for David Cronenberg’s ‘Eastern Promises’. We sat down with Caoimhe to pick her brain and get an insight into the wonderfully weird world of Foley!

Hello Caoimhe! For those who have never heard of ‘Foley’ how would you define what a Foley Artist is?

So, a Foley artist recreates sound effects for film, TV, video games, adverts, that type of thing. What we do is create the organic sounding things like footsteps, skin touches, body grabs, swords out of scabbards, punches, that kind of thing. We don’t do engines, car engines, jet engines, that kind of thing, but we would do the rest of the spectrum of sound that would be in a feature film.

How did you get into being a Foley Artist?

So in the late 90’s a Foley artist came to visit Ireland called Andy Malcolm, he came from Toronto and he was flown in to do a movie and I was working as an assistant sound editor. I got to see this guy work through the projector window one evening and was really intrigued with the craft. I couldn’t believe it was actually a job and I’d never met anyone in their sixties who loved what they did their whole working career, I was intrigued by that. Andy was very open about the craft, very supportive and invited me to live and work in Canada to train with him.

What are the essential tools of a Foley artist?

Lots and lots of different shoes for the first thing! Any time you see something that sounds interesting and is easy to manipulate and recreate that sound you’d start collecting. I have rooms and rooms of props that I’ve collected over many years and then you need to index it and have it all really ordered so that when you go up to the room and you want to find say dogs feet, that you have the drawer with the dogs feet, and you want to find a vintage lighter you pull the drawer and you have that, and whatever it is that it is easy to access.

What’s the strangest item you’ve used in this collection to make a sound?

I’m not sure of the strangest but there’s a whole host of unusual items like, one of the most useful is a chamois for cleaning cars, we’ve delivered babies and taken the heads off horses and pulled hearts out of chests and all that kind of stuff with a chamois! A chamois would get you through a lot of things but we also used cabbage, celery, rigatoni pasta, roast chickens, lobsters, right up to bumpers of cars and hub caps and all sorts of metallic items, air vent units, it is an infinite list of interesting sonic props, it’s infinite.

What’s the strangest sound you’d have to recreate then with these items?

Well, I don’t know if I’ve an answer for the strangest, because there have been so many strange requests over the years. There’s often things that are other worldly, there would be no right or wrong to it you just have to bring something to it. The sound of an alien and how their body might move; delivering an egg out of a dragon’s womb; how would that sound? Its kind of an open pallet and that’s the wonder and the lovely thing about it is you know there are many ways to take it and finding which one is your personal way of bringing it is always rewarding.

What’s your favourite project that you’ve worked on over the years?

I guess the first show I ever did with Andy Malcolm was a really inspiring time for me. The first full film I did was Disco Pigs, and that was the first time I did a whole feature with Andy, I’d done stuff before that and that was such an amazing experience that just altered the course of my life, so that would be a really big one for me. Reign of Fire was a really great one and that was working with one of my favourite sound designers out there, Leslie Shatz, an absolute legend sound designer and we had three weeks together. I loved every minute of that, I worked the hardest I’d ever worked up to that point!

Do you find a difference between the mediums?

I’d say animation is my personal favourite. It’s a blank canvas when it comes in and you just have the voices and you can bring it so many different ways. Its so rewarding playing back an animation because suddenly there’s life and texture and layering and characterisation. Animation and Foley is such a good partnership.

What would be the worst thing about being a Foley artist?

The ever-decreasing schedules! It is a business, it is about money a lot of the time and just in terms of the scheduling it is about money, so you might be dying to throw everything you have at it, but schedule-wise you’re not able to. It kills you because you just want to do it right. It’s also quite physical, you’re throwing stuff around the room and occasionally car doors fall on you and hurt you and you’ve to be careful! You’ve got to love films, be in fairly good physical shape, because your going to be running on the spot holding your breath, throwing stuff around the room and just physically be able to go for the day and have good hand eye coordination.

Would you see Foley work as almost a type of performance art?

There certainly is an element of performance and I think that’s thankfully why we haven’t been replaced by computers. We just want to be storytellers and aid the story. The more seamless we get and the more no one notices our work, the more we’ve succeeded.

What makes a good Foley artist?

I guess the good physical shape, a love of film, hand eye coordination, and then anyone who is good at anything are the ones who don’t give up. They’re the ones who push you through, keep pushing when most other people walk away from a project, anyone who’s good will be the one who stays at it. Each Foley artist will manipulate a prop differently and its knowing when to put something down when it doesn’t work and pick something else up, it’s a spur of the moment.

You rarely work as a Foley artist in isolation, it always seems to be a team effort. What are the qualities needed to have a good working partnership with a Foley mixer?

Foley is an absolute collaboration, it doesn’t matter what I’m doing in front of the microphone if its not being recorded and placed in the right acoustic environment it will never work, so its essential and I am very fortunate to have Ireland’s premier Foley recorder (Jean McGrath) as somebody I work with every day. You might notice when we’re working that there’s very little dialogue between us, we just get stuck in and if it works it works and if it doesn’t work okay try something else. In Foley the energy can become stagnant in the room and suddenly the ideas stop coming if there’s something holding up that process. Jean only assists that, she brings it forward and drives it on and that’s a really rare thing and over the years I’ve realised just how rare it is and when you find it it’s just gold.

Last question Caoimhe, what would you say to someone looking to get into Foley?

Most of the Foley now is done under the umbrella of post-houses, so that makes it simple! It’s not a hugely technical area, the biggest thing is the props, a selection of props that will carry you through. Training is really important as well, it’s done on a kind of apprenticeship basis so they’d come in and they’d assist. Having the initiative to just get up and move if something needs to be done and to get stuck in is very important, know when to be involved and know when to not be involved. Somebody who is willing to be on board the minute they walk into the room is somebody who would be invited back.
Click here for pictures from the Foley Seminar at Pulse College