Pulse College alumnus from our Music Production BA (Hons) Degree, Amy Miller, was recently the focus of an article with IFTN (Irish Film and Television Network), where she spoke about how she made the transition from college into her current role as an assistant producer/audio editor currently managing, coordinating and editing a new feature radio series called ‘Vocal Chords’ for RTÉ Lyric FM amongst editing some other TV documentaries and radio series. 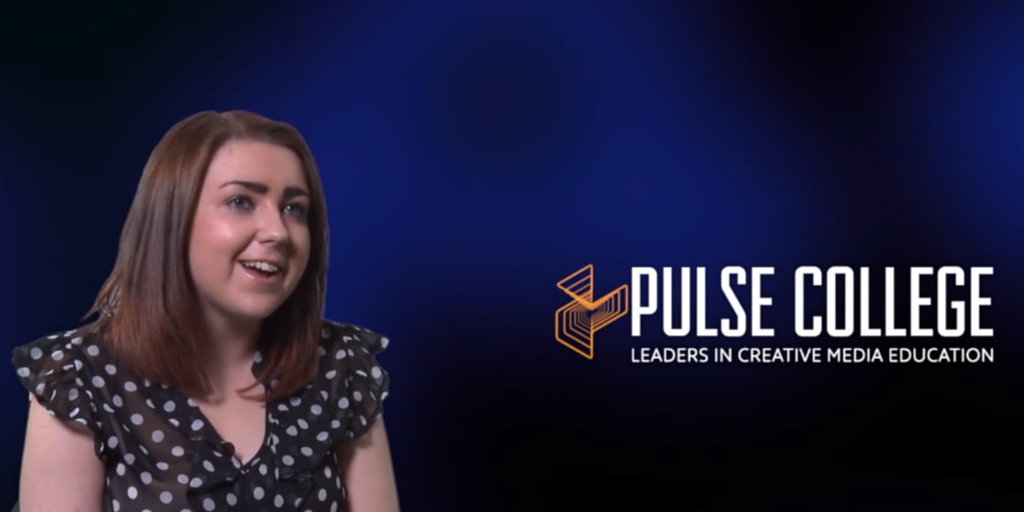 As part of the Making The Cut Series, IFTN profiles some of the countries most accomplished young graduates of the past few years to find out more about the places they first cut their teeth in the industry.

IFTN: How did Pulse college prepare you for your career in film?

AMY MILLER: ‘Though I originally went to Pulse to do the music production degree with the prospect of working in recording studios and producing albums, Pulse opened my eyes to other options. I am now an assistant producer and audio editor, having other roles including production coordinator and managing projects. I’d never considered audio editing solely as an option until a sound design module in second year and a range of modules including training in Final Cut Pro, producing a music video and film theory classes on top of all the recording/producing modules that you’d expect from this course, intrigued my interest in TV/film and allowed me to see that there were other options out there.’

Were you offered practical experience/work placement as part of your course? If so, how did it benefit you?

‘Rather than being put on placements our modules and assignments were very much focussed on encouraging us to go out there and find practical work which I think is perhaps more useful than being put on a placement. Most college students don’t get handed a job as soon as they graduate so we had to go out, make connections, send emails, talk to people and get the work – all of which is how it works in the real world, and is probably the hardest part. It’s a life lesson and is even more beneficial than just work experience alone. For me personally I took the opportunity in third year to use my career development project to get real life experience and worked as an audio editor on animations and a radio series. The process definitely made the transition from college student to working professional easier and allowed me to gain credibility and relationships in the working environment.’

How did you make the transition from education to paid employment?

‘I got my first job out of volunteer work I did for a song-writing workshop in college. They needed engineers to facilitate recordings so I went in over a weekend to help out. I had a great time with the workshop participants and worked hard to help him. That was noticed at the workshop and the organisers made some very nice comments about it. My name was mentioned to a company that was looking for an audio editor for animation and I got a job there for 6 months. I also got my current job on recommendation. I may not be the best in my year group at everything or got the highest grade in the class but it was my passion for what I do and hard work that was recognised and that ultimately got me the job.’

‘The transition itself was difficult in a sense that it’s a whole new mind-set and there’s a lot more responsibility when people are relying on you to get the job done. In college the only person you let down by not doing the work is yourself. In a job people are counting on you so it does require you to take responsibility of that and of course that can be a little stressful at times especially under short time constraints. What college, and in my case what pulse taught me through assignment work was how to manage my time, knowing your priorities. The work experience of course during my third year really helped though because nothing prepares you more for the real world than actually doing the job.’

What areas in training for film/TV production do you feel are lacking overall in Ireland? How can improvements be made?

‘Personally I think I’d love to see more focus on the fundamentals and the business behind making film and TV. As a nation we are very creative and very lucky to have lots of outlets to foster that but behind every film is budgets, accounts, insurance, coordinating, administration, liaising with cast/crew/stake holders etc. None of which is possible to make a film without. I’d love to see something like a Masters programme in business for film/media.’

‘A lot of film students coming out of college now work as freelance professionals, my first year in the job, although being very lucky to work 5 days a week, I was freelance myself. I’d love to see more advice with regards to tax and obligations as a film professional and perhaps training in running a business or creating a business model and self-promotion specifically aimed at the film industry. Working as freelance you are essentially your own business, and I think it’s very important to know your rights but also what is expected of you.’

What are you currently working on and what plans do you have for the future?

‘I’m currently managing, coordinating and editing a new feature radio series called ‘Vocal Chords’ for RTE lyric FM amongst editing some other TV documentaries and radio series. I’m finding more and more that I’m hugely interested in the production side of TV/film and radio so for the future I’d definitely like to try more of that. My job at the moment is allowing me to do some of this and a lot more as we create a wide variety of content across multiple media platforms (apps, tv, radio, online video, podcasting etc). I’m very open to trying a bit of everything and I think even if you’re sole interest might be in film specifically, in this age being diverse in what you can do is key.’

Have you any further advice for anyone wishing to get into film in Ireland?

‘I would say that people getting into film need to work hard and be dedicated. There’s long hours and sometimes no pay is to be expected but diligence and commitment doesn’t go unnoticed. The real mark of success is not being asked to do a job but being asked back to do it again. If you can’t find opportunities, make your own. Get creative and make content yourself and share online – Vimeo, YouTube, WordPress, Audioboom etc are all great platforms. Doing things yourself shows initiative and a get-go attitude and it can’t hurt to have a showreel when opportunities arise. Don’t limit yourself to one thing… I started out in music but am now involved with tv, radio and online content. There’s so many options out there, and like me, you might not even be aware of them. Be open to trying them, you might find something you like.’