My name is Eanna Brown and I am a 1st Year Audio Diploma student here in Pulse College. Very
recently I was the front-of-house engineer for the first annual iDIG Music Fest, a festival dedicated to video game music and those who make it. The festival ran from April 2nd-4th in the Convention Centre in Dublin, and was organised by acclaimed video game composers Eimear Noone (World of Warcraft: Warlords of Draenor) and Craig Stuart Garfinkle (Baldur’s Gate II, WoW: Warlords of Draenor) – who also guest lectures on the MA in Scoring for Film and Visual Media right here in Pulse College.

I first heard of iDIG Music Fest through a Facebook advertisement, where they announced they were looking for volunteers to help out with running the event. I sent an email to Craig offering my assistance and I was brought on to the team shortly after. Initially I expected that I would be needed purely to help out with the usual convention stuff such as showing people where everything is and stewarding the entrance, which I was perfectly fine with. However when I mentioned my previous experience and my course to Craig I was asked to look after the FOH engineering for the festival.

Even though I have been doing live sound for about 8 years prior to coming to Pulse College, this was still the largest project that I ever had a chance to work on. There was a wide mix of acts from many different genres to work with. Included in the lineup were the DIT Traditional Music Ensemble, the Triforce Quartet (a string quartet from Washington D.C, USA), Classroom Battles (a 4-piece electronic music group from Dublin) and my personal favourites, The Spoony Bards (a 5- piece rock group from Belfast). Obviously, there were varying amounts of equipment required, which needed to be coordinated before the festival. As well as this, the room that most of the acts were performing in provided some limitations to what we could mic up due to its size. 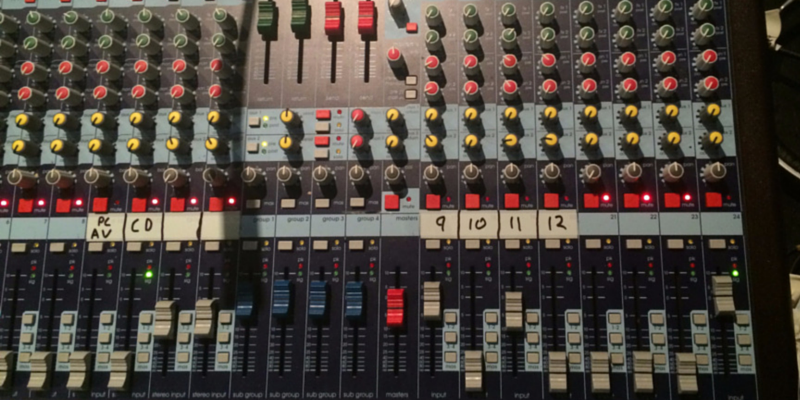 Thankfully, I wasn’t alone in looking after the technical side of the festival. As well as being assisted by the in-house technical team at the Convention Centre, one of the lecturers in Pulse, Debbie Smith, enlisted the help of a few 2nd year Audio Diploma students for all 3 days of the festival. The guys were a great help in getting gear moved on and off stage and providing feedback on the room mix. This was particularly useful in the case of the Spoony Bards as we had to mix their performance without being able to mic up the drums due to the room size. For the DIT Music Ensemble, we used a spaced stereo pair of AKG 414 microphones to cover all 19 members of the ensemble, while the Triforce Quartet had their own clip-on microphones which were connected to a pair of stereo DIs.

While I was the FOH engineer for the main part of the festival, I was mainly involved in the setup and takedown for the Video Games Live concert on the final day. This was a great opportunity for me to see how a major show like this works behind the scenes, and the experience I gained from shadowing the show’s FOH engineer was invaluable. While I could obviously tell a lot of effort went into a show of that size before I got to the venue, I had no idea how huge that amount of effort and planning was, between setting up the monitor mixes for the orchestra, to the soundcheck, to syncing up the actual audio of what was being played with the video being shown on screen.

Despite the fact that so much was going on all the time, the technical staff from VGL were still happy to answer any questions I asked them, which provided further insight into how the technical side of a show that size worked.

All in all it was a busy 3 days, but a very rewarding 3 days as well. The practical experience myself and the other students working the event gained was invaluable. Not only that, but the lecturers provided by leading figures of the game music industry (including Craig, Eimear, Russell Brower and Christopher Tin) were very informative and interesting, and provided a great insight into the industry. I want to take a moment to thank Debbie, George, Germain, Oisin, Filipe, Anthony and Gabriel for all their help over the weekend. It was much appreciated by myself and the rest of the festival team!

Already plans are in place for the next iDIG Music Festival. If you have any interest in game music or live sound I would strongly recommend signing up to volunteer at next year’s event. There is talk of having it during the weekend of April 29th, 2016. Be sure to keep an eye on the iDIG Music Fest Facebook page for more updates, and feel free to contact me on Twitter if you have any questions, I’d be glad to answer them!

Find out more about our Audio & Music Technology course which Eanna is currently enrolled on.