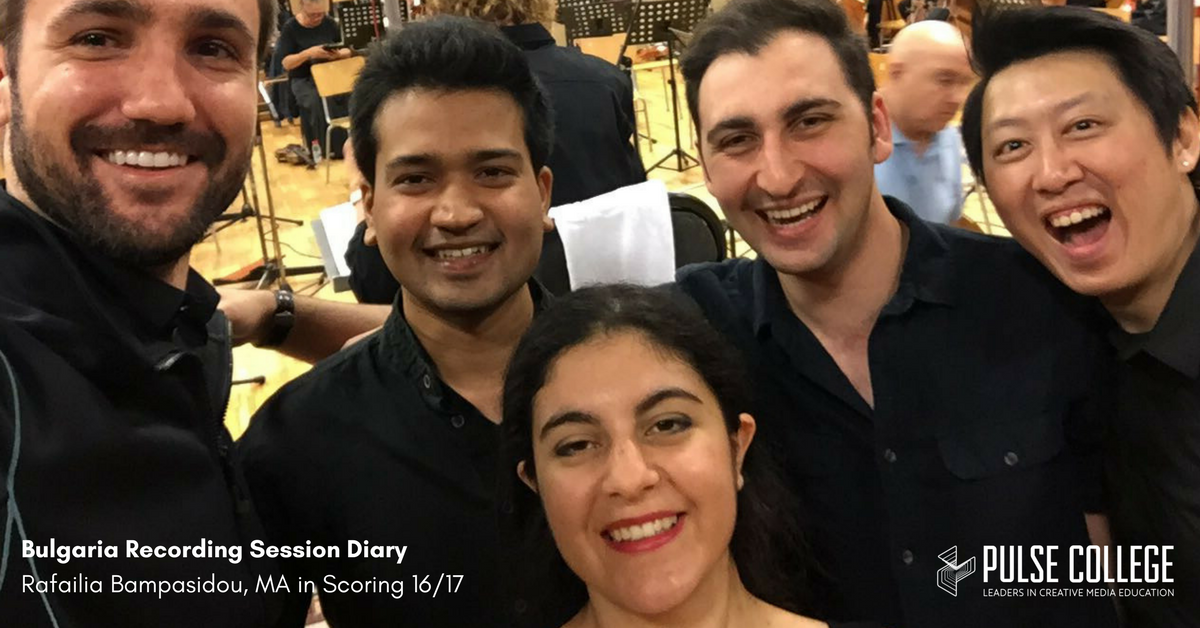 Last month, our MA in Scoring for Film & Visual Media students travelled to Bulgaria to record their compositions with a 110-Piece Orchestra at the BNR National Recording Studio’s. We asked student Rafailia Bampasidou to write a diary of her experience!

May was the month of the great musical adventure in Bulgaria! It was the ending of a long year full of assignments and stress but at the same time a learning process for everyone in class. The most important thing is that the 12 people of the MA in Scoring class of 2016-2017 became a family inside and outside the classroom. Every recording during the year was one step closer for us to the big recording in Sofia, Bulgaria. It was one of the main reasons that everybody applied to Pulse College for and it was worth it.

Before the recording session we had almost a month to prepare for it. That was; two days to make a rough sketch of the whole piece and give it to Conrad Pope (visiting tutor for the Orchestration module) / 2 weeks of classes with Conrad while we received his precious suggestions and advice on orchestration and life / 2 weeks to finish the composition, make parts, proof reading everything, print and tape everything.

#Repost by #MA in #FilmScoring student @pas_music, running through final prep for this weekends 110 piece orchestra #recording in Bulgaria National Recording Studios 👌 ・・・ “Here is what music for a 110 piece studio #orchestra looks like. Studio score preparation is happening at PAS Music!”

Absorbing Conrad Pope’s endless experience was a once in a lifetime opportunity, learning about orchestration techniques, sound, styles, music aesthetics, and approach of life as a film composer. He is definitely the best orchestrator in the film industry and one of the most pleasant tutors to work with. He can understand immediately what you are looking for from the orchestra, and he encourages every musical attempt. Always willing to answer questions, always ready to amaze with his effortless ability to create the best orchestral sound for every piece that he gets.

Keep in mind that this year we were a class of 12 people from 11 different countries (USA , India, Greece, Luxembourg, Puerto Rico, Norway, South Korea, Singapore, South Africa, Northern Ireland, Mexico) and with different musical backgrounds and abilities (music production, sound engineering, performance and composition in classical music, progressive rock, metal, jazz, music education and conducting). What we got from all this amazing blend of flavours and skills, was a great collaboration amongst us. We learnt a lot from each other. We helped each other. We created with each other. Most of all, we shared the same stressful and most amazing experience in our lives.

Proud to be recording alongside these brilliant composers

Day 1 / Saturday 20th May
Before Saturday it was an intense week, preparing the parts, proof reading, editing, printing and taping. The flight to Bulgaria was early on Saturday, and many didn’t sleep at all to get everything done on time. Everyone slept on the plane, everyone anticipated the recording so much. When we landed, we had to get that recording order done, as well as put the parts in order and take them to BNR studio. We decided that our classmate Jeremy Leidhecker would conduct 4 pieces (mine, Fran’s, his own, and Jerome’s), Philip would conduct his, and Ciaran Crilly would conduct Angie’s. Everything else would be conducted by MA in Scoring Artistic Director, Derek Gleeson. After a quick consultation with Derek, the running order for the performances was decided.

After that, we got to work to prepare the parts to be in order and after hours of doing so, myself and Grant, with the film crew, went to the recording studios and prepared the parts on the musicians stands. It was my first time touching a celesta, my instrument for life!

Day 2 / Sunday 21st May
The day of the session and everybody was anxious and anticipating the moment. Some wanted to try to conduct the last take, others they want to go earlier to the studio, everybody gets there finally. At 12pm, recording starts with Alex Oh’s piece, with Derek conducting.

This was epic orchestral work suited for a Marvel big budget film! Everybody got chills when we heard for the first time the sound of the orchestra from the gallery. In this moment our pieces which we heard in class in an infant state are now blossoming in the hands of very capable musicians. For me, it’s very emotional because this is the last recording session we will all do together as part of the program. This family will soon split to several parts of the world.

Darshan Shah up next and killing it!

Second was Darshan, as always with interesting rhythm and magical feel, he leads us to a colourful music place that it is fit for a Harry Potter movie. Milo is third with Knights of Bayamon. His full harmony and jazz spice, but also his undeniable melodies which stick in your head, they are all there, especially in the brass. Alexander was next, bringing his brilliance in orchestration and old school sophisticated Hollywood sound with his own modern twist. Amazing writing especially in the winds. You can understand his jazz background for a moment, but you can also understand his John Williams influences that he does full justice to. Conor is fift, and presents an Avengers score which is as epic as can be. His strings are fast, strong and demanding and the bulgarians make them sound good. It is a short but full with sound and energy piece.

Up next is Alexander Aaroen with his piece, Child of Winter. Wait till you hear the end of this piece! @pianoja

My piece was the last one before the break, and the musicians were warmed up, but also a little bit tired. Jeremy, who was to conduct my piece, was having his first contact with this orchestra. I was stressed in the beginning because they wouldn’t get it with the first run through but Jeremy turned to me and said “I’ve got this.” and he was determined that they played it right. So, I went into the booth and left him to do what he does best.

In the booth, you don’t hear what you hear when you are in the gallery. You really listen to everything dry and you get really stressed! You don’t understand what is happening around you. You have Debbie Smith to engineer for you, Christo Pavlov to supervise and Ciaran Crilly to help you see the details. But really what you wanna do is to go out with your class mates and cry out with them for how amazing you feel about this live orchestral music that you wrote! In the end, the recording was very good and Jeremy made me feel very satisfied that I picked him as my conductor.

Sofia your orchestra sounds amazing! Rafailia’s piece being conducted by our own @jdleidhecker

After lunch, it was Fran’s time to shine. Being a sound engineer, he has a distinct voice in how he perceives sound. He is the most player-friendly composer of the bunch but also has his own modern voice. He is always professional and takes care of his players. You could see it in every take of his piece, in the last bars where there was a viola solo with celesta playing one note. Everybody was so quiet and smiley and the viola player was really surprised and satisfied that he finally got a solo!

Jerome was 8th with “Fury of Kratos”, the greek god of power. Jerome’s piece was also conducted by Jeremy and as he said “I felt angry while conducting it”. I suppose that was Jerome’s intention all along because everything was shaking in the studio from his unearthly and sub-bass full sound. His brass writing made horns reach their limits in unison!

Jerome’s piece “The Fury of Kratos” showing us what anger sounds like!

Jeremy was next conducting his own piece which he actually named “110”! Jeremy started writing his piece saying he would do something that he has never written before. To be honest, I got worried about him. But when I heard the whole piece in Bulgaria, I got goosebumps. I was really proud of him because he wrote something out of his comfort zone and he wrote a big epic orchestral piece which can make you stand up from your seat. The players enjoyed playing despite the fact that he challenged all of them and he even raised the tempo at 184bpm! At his best take, he was conducting so intensively that he almost stabbed a cellist with the pencil that flew from his ear to the poor player!

Jeremy left the podium and Phillip came up. Always having his neat baton and his south american sound, he conducted with much care and sensitivity. Memorable melodies and brass harmony were always a “Philbo” characteristic. Grant was next and Derek Gleeson returned to the podium to conduct his piece “Imago”. Grant is a guitar player at a progressive rock band and a music producer. Despite all of these influences, throughout the year he managed to experiment with everything an orchestra can offer. His weird harmonies, his instrument techniques and his overall point of view always makes me interested to listen to his music. That happened at his 110 piece recording. String sections with interesting dissonances, brass epic sections and weird woodwinds made his music full of variety.

Phillip is up! His piece “The American Dream” is full of triumph and grandeur! @pas_music

The last, but not the least, student to have their composition performed was Angie, with Ciaran Crilly conducting. We never listened to the full version of Angie’s piece in class. That made us all really curious to sit down and listen to it. From the first run through the orchestra got it, her rich and thick harmonies. Her piece was beautiful and moving. We thought quietly and loudly, that this is the perfect ending for a perfect recording session.

Day 3 / Monday 22nd May
This was the last day in Bulgaria. Everyone was scattered everywhere in town and in the hotel. Some of us preferred to walk, others to chill out, the sure thing is we know that we won’t forget the previous day. We won’t forget the orchestra, we won’t forget the first feeling of listening our piece performed live from this huge ensemble, and having the support of this lovely group. We were told by Christo Pavlov that “This was a very smooth recording session because you are a very tight group”. Well, we have become a film scoring family. A family that loves listening to each other and cares for each other. We will be crossing roads soon again in some other recording session, my friends.