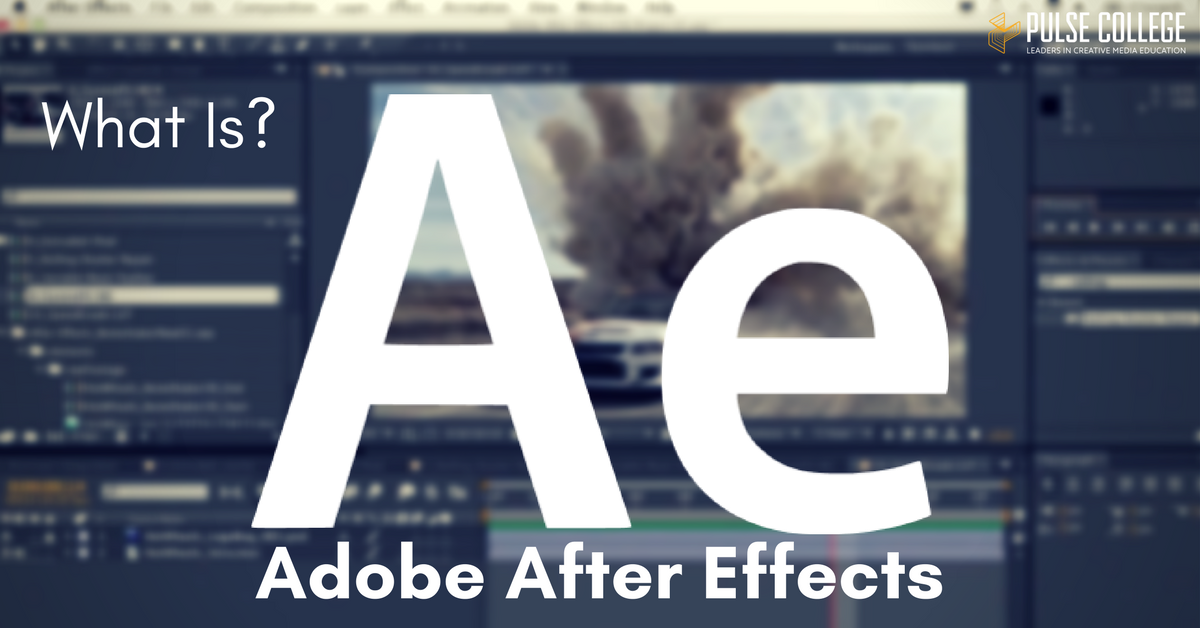 If you’re into film production and animation there’s a good chance you’ve heard people talking about Adobe After Effects. Whether you consider yourself an expert user or are just starting to experiment with it as a student on film courses for example, you’ve probably already grasped how incredibly powerful After Effects really is.

In this blog, we outline a brief overview of the software and talk about some of its key features and what they’re used for.

Adobe After Effects is considered to be the industry standard when it comes to motion graphics and video effects. The software contains some seriously powerful tools that can be adapted to perform lots of different jobs, from simple editing to the kind of complex 3D compositing that we see in Hollywood blockbusters. It’s this kind of versatility that makes it a hit in production houses – a VFX artist might use After Effects for compositing 3D rendered footage, an animator could use it for creating cartoons and an editor might use it for title design work.

In reality After Effects is so rich in functionality that it can be hard to easily describe what it does because it does so many things so well!

If you have played around with some of the tools and are a little overwhelmed or worried you’re only using 10% of the features and will never get to grips with it all – don’t panic because you’re not alone! Just about everyone, including many of our students felt the same at the beginning and we encourage you to stick with. Once you learn to work your way around the software, you can start to grow your expertise and as your skills develop, you’ll be able to tap into one of the most creative pieces of software around. So it’s worth slogging it out. Here’s a whistle-stop tour of the key features.

The Title Design tool within Adobe After Effects is great for putting together slick looking titles for your projects. The tool works in the same way as most word processors and includes some basic options for editing. What makes the Title Tool great is that you can easily animate characters, words or whole lines depending on how you want them to look.

Even after an introductory Adobe After Effects course you’ll be able to put professional titles on your work. And first impressions count!

Compositing is a term used to describe merging multiple images that originate from different sources, this could be still images, videos or even hand drawn images. These are combined by production professionals to create an illusion that they all exist naturally in the one environment. For example, you may be trying to edit some green screen footage onto another background and add an explosion or smoke to make a scene look great.

Layers are another important feature students need to get to grips with. Adobe After Effects can control different layers, in a similar way that other software packages work, like Adobe Illustrator or Adobe Photoshop. Layering is the process where multiple images are stacked on top of each other.

Layers can be blended and manipulated to affect the way they interact with the footage behind them. Animators use this layering process to create effective 3D models and designs.

One of the best new features in Adobe After Effects is the Roto Brush which is used to clean up your footage and remove elements you don’t like. The new tool really speeds up the process, and we’ve found that our students really appreciate the time saving!  It’s now possible to remove the bits you don’t like in just one frame and Adobe After Effects can then work its magic to take them out of the rest of the footage.

It’s possible to do even more with Adobe After Effects by adding additional plugins. There’s hundreds of different plugins available to add increased functionality. Some of these can be a bit expensive to buy so watch out for that when you’re a student but don’t worry – when you’ve landed that dream job after your Adobe After Effects course hopefully you’ll have access to all those plugins at no cost to yourself!

Without a doubt Adobe After Effects is one of the most comprehensive software packages out there. If you want to learn more of its features we run a three day After Effects Course, check out the course page or drop down to one of our open days to find out more.