When Tony Perrey, founding Director and President of Pulse College, chats away happily he doesn’t sound like he has lived a rock’n’roll lifestyle. Equally he definitely doesn’t come across as a stuffy academic or a corporate bod – yet he has managed to successfully cross the divide between both the creative world of working with recording artists and the education of students looking to make a career for themselves in the industry. And he has pulled both aspects of his success under one iconic roof; in the name of Windmill Lane Recording Studios. The facility not only hosts some of the best known bands in the world (the brand is most famously associated with U2 of course) but it’s also the home of Pulse College; the leading college in creative media education here in Ireland. 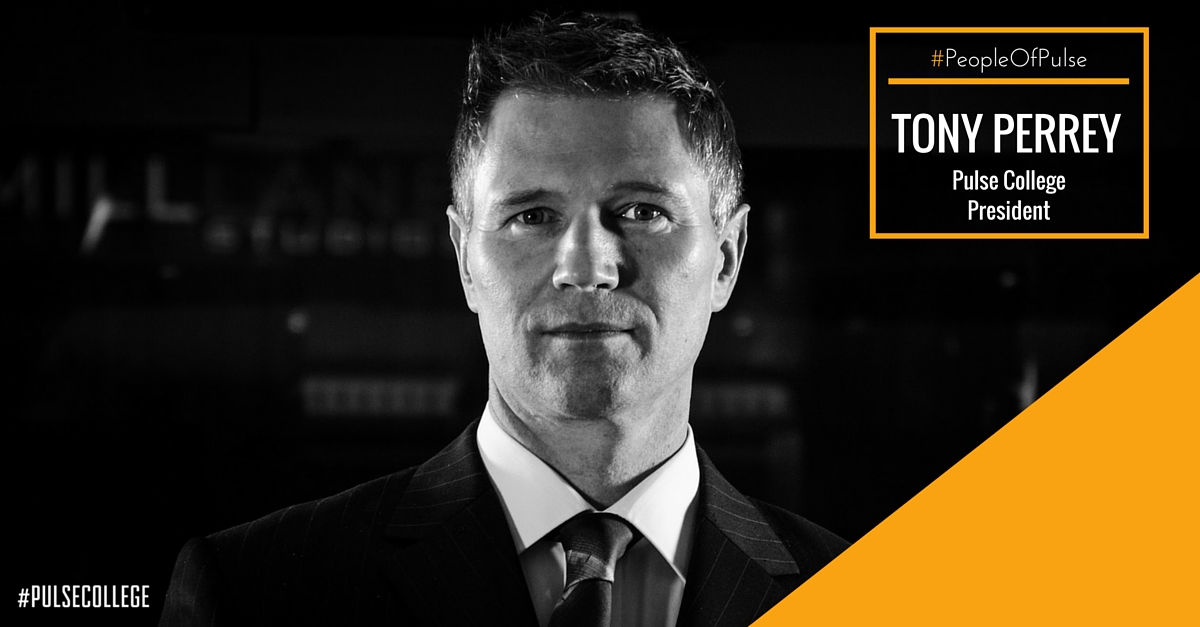 Ironically it was hard to track down Tony – a much sought-after music producer and engineer – but there was good reason for this; Tony explained that right now he’s working 12 hour days in studio with the Hot House Flowers, recording a song that’s going to be the opening track on the first episode of the next series of ‘The Good Wife’ – two powerful entertainment acts making a little music magic under Tony’s technical guidance in the studio. They may be long days but they sure as hell sound like good ones!

So Tony, how did you get started in the business?

Well like a lot of people in this industry, I started in a band; I was the singer actually but we weren’t that great! So I took a job at McNeive Music in the Ilac Centre – I started in the warehouse and worked my way out onto the shop floor selling equipment. I discovered I had a knack for the keyboards and started doing demo’s for customers. It was a pretty cool shop actually; they had very high-end, new music production technology like Akai Samplers. I was really lucky in this respect; if you had looked for music courses in Dublin that focussed on technology, at that time – they didn’t exist. But because I was selling the samplers, guys from Akai came over from the UK and trained me to use them. What started as a warehouse job turned into me being in the right place at the right time – though I put the hard work in too; I think it was a case of preparedness meets opportunity.

That’s what really got me into music technology in the early days and I haven’t looked back since!

When did teaching music courses in Dublin enter into the equation?

After a while myself and another guy set up a tiny pre-production studio using Musical Instrument Digital Interface (MIDI) technology which was just coming onto the scene – there was nothing else like it and we were pretty good at what we did. So we got some commercial work like ads. fairly quickly but we also found that there was a demand for lessons on the MIDI systems.

So the mix of doing commercial work alongside the teaching was really formed in those early days and that ethos has served us well throughout the development of Pulse College.

Around 1995 we found an open airy building at 67 Pleasant Place – we turned it into a really beautiful studio for The Engine Room Recording Studio and there was plenty of space to teach courses as well. I was the main engineer and the recording sessions were really gruelling – but those 12 hour sessions (some things haven’t changed!) really helped to develop my skills and expertise and I was able to bring all that knowledge and hands-on experience straight into the classroom, at our music courses in Dublin.

Pulse College evolved out of the academic side of the business at The Engine Room.

Yep, we managed to attract some of the top acts at the time – that’s still the case today but even in those early years we had New Order, Snoop Dogg, 50 Cent, Moya Brennan, Bryan Adams and loads more.

We may not have been the biggest studio in town but we were definitely leading the way in terms of technology – the other studios were withering on the vine in that respect. When you’re on top of your game you can be really creative with the technology.

If you’re sitting behind a mixing console working with incredible talent – there’s nothing like it; it’s such a buzz! We’ve been lucky to work with some amazing recording artists and that energy courses right through the studios and into the college classrooms.

Why did you develop the academic side of Pulse College?

I’ve always believed that students should have some formal acknowledgement of the work they have done. After we moved to Pleasant Place, we realised we need to formalise the qualifications so we arranged to offer a City and Guilds 2 year course in Sound Engineering. That was a breakthrough for Irish students at the time.

Now at Pulse all our courses are underpinned by academic rigour and soon each course will be on the National Framework, ranging from Levels 6 to 9 – that’s important for the students and it’s important to me that we offer that.

If you’re intrested in learning from Tony and the team at Pulse College, check out our music courses in Dublin, as well as the Audio, Film, Gaming and Animation courses now.

Or come along on an open day to find out more.