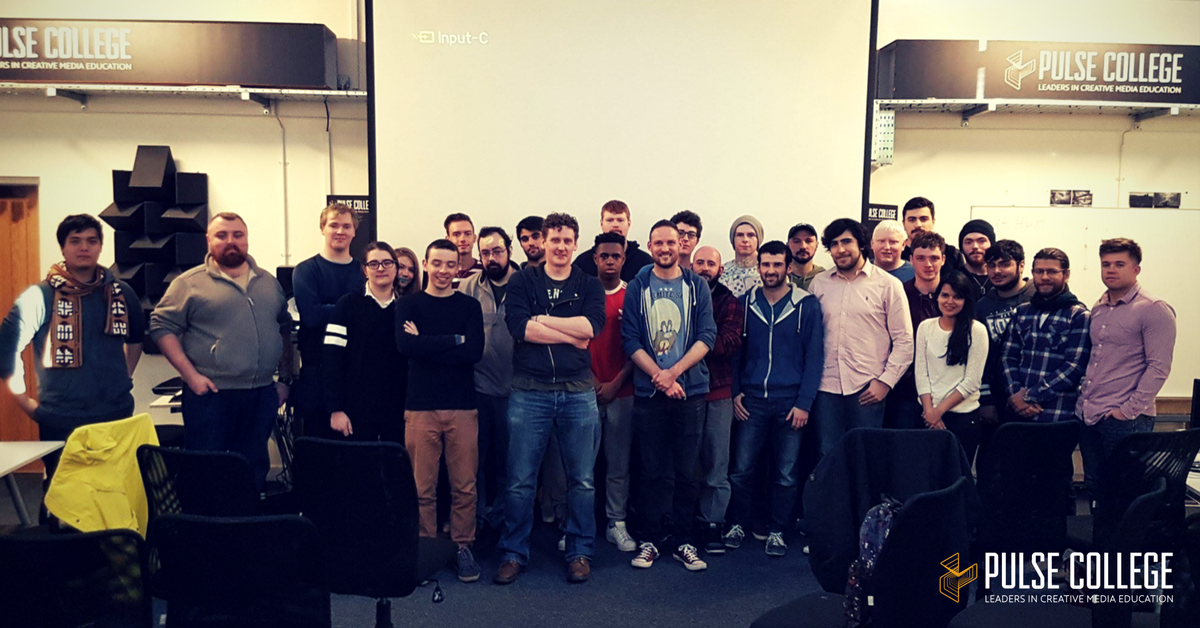 We were delighted to recently host Terry Kenny of Variable State studios as he gave a Masterclass in Games Design and Animation. Over an hour long discussion in front of a packed room of students, Terry offered an insight into the journey from his first professional roles after leaving college, working for Rockstar Games, to setting up Variable State, and all the way through to the launch and success of one the best games of the year, ‘Virginia’, a first-person mystery thriller adventure game that takes place in a fictionalised Virginia in 1992 – check out the trailer below!

One of the take-home points made from Terry during the student Q&A section of the Masterclass was that the games development and animation process is all about compromise, what can you do within your scope? You have to make what you can, as best you can and move on. Don’t drive yourself insane with it.

We spoke with some of our students and course director afterwards to get their thoughts on the Masterclass:

“To have an experienced veteran of the gaming industry share his stories of success and struggle with Pulse College students is truly a gift. Many people enter this field not knowing which way is up, but Kenny’s talk helped to find the ground. His honest views about working for big companies and the challenges (both expected and unexpected) that came with trying to do something with his own team were eye-opening and greatly appreciated. Terry Kenny represents a mark to shoot for and after meeting him, it seems more possible than ever.”

“It was a great experience to meet Terry Kenny, he’s such an influential creator of games. His insights on the games industry and experience he shared with us really gave us a new angle to look at games and the development process.”

“Its always very exciting to have someone as talented as Terry Kenny come visit the college. Terry has a wealth of industry experience from being an Animator at the world famous Rockstar Games to his latest success as Game Developer at Variable State and their most recent release Virginia. As an Irish developer and animator, Terry can really give everyone great insight into what it takes to break into the AAA scene as well as the challenges facing an independent developer.”

#Masterclass kicking off with Terry Kenny of @VariableStateltd. Students really looking forward to hearing his many wise words on #Animation and #GamesDesign. Terry is founder of #VariableState, who recently released the amazing game, #Virginia.

“We wanted to make something unapologetically linear.” Terry Kenny speaking about #Virginia pic.twitter.com/r89HjjxQUc

Opening the floor for a student Q&A with Terry Kenny @VariableState at today’s #Masterclass pic.twitter.com/or4sT5xchw

“Have a frame of reference for what you’re going to do. Don’t just rush in and do it.” Terry Kenny #Masterclass

Big thanks to Terry Kenny from @VariableState for giving his time today to chat all things games design and animation for #Virginia 👏 pic.twitter.com/T2C2ABRXFJ