What is Sequential Art? From History to Today

The term sequential art is often used interchangeably with the term comic, however there is much more to it than just that. While comics are a form of sequential art; there are many other disciplines that fall under this umbrella term.

In this article, we explore the various forms of sequential art. But first, let’s define what exactly it is…

What is sequential art?

As the name alludes to, sequential art refers to the use of visuals – such as drawings, images and/or photos – that are used in a sequence in order to tell or illustrate a story. In some cases, it includes a combination of visuals and text thought text is not necessary for it to be considered sequential art.

The Evolution of Sequential Art

While The comic strip may be the most recognisable form of sequential art in today’s world, this art form actually predates comics by millennia. In fact, the human race has been using visuals to convey information or ‘stories’ long before the invention of the written word. Let’s take a brief look at the evolution of sequential art and its various forms throughout history.

Wall painting is considered to be the first form of graphic communication and predates written communication. The earliest examples of this can be found in caves which home rudimentary paintings seeking to transmit the prehistoric human experience in a sequential format. Egyptian hieroglyphs were a more evolved form of this which show a more methodical and organised depiction of their lifestyle.

As civilisation progressed so did the art. Greek artists used to sculpt images that would tell a story on friezes and vases. An early surviving example of a narrative told through the use of sequential images is the Trajan’s Column in Rome which dates back to 113 AD.

This is a form of textile art which incorporates the skill of weaving with the art of conveying a story through images. The Bayeux Tapestry (contrary to the name it was in fact embroidered and not woven) however it remains the most recognisable example of a sequential tapestry piece as it depicts the story of the Norman conquest of England. A modern example of sequential tapestry was a 77 metre long piece commissioned by Tourism Northern Ireland in 2018 to memorialise the hugely successful Game of Thrones tv series, known as the Game of Thrones Tapestry.

Painting is another medium where sequential art can be seen. Particularly so during the renaissance when paintings often told the narrative of various biblical stories. Such as the Adam and Eve painting by German artist, Lucas Cranach the Elder.

After the invention of the printing press, comics became the latest iteration of sequential art. As an art form comics became widely popular featuring in newspapers and magazines in the late 19th and early 20th centuries. Still today comics can be found in newspapers and magazines, but they were so widely popular that comic books became a standalone product enjoyed by many.

The storyboard is commonly a series of illustrations, pictures or images displayed in sequence that allows artists to plan out their projects. Storyboards are now a frequent practice in the creative industry. They are used in order to previsualise a wide array of creative projects such as motion pictures, motion graphic, animation or interactive media sequence, including website interactivity.

A graphic novel, as the name suggests, is a novel that tells a complete story through the use of illustrations.

As opposed to comics, which are excerpts of a larger narrative that is published piece by piece over time. A graphic novel contains a beginning, middle, and end and will offer the type of resolution that is expected from a novel.

However, in the modern era, it has become almost synonymous with the term comic book. This has left many wondering just what the difference between sequential art and illustration is, as they can appear to be very similar. Well let’s clear that up by first defining what illustration is and how it can be different…

Illustration is the use of visual expressions also known as drawings which help the reader to further understand and visualize what had been stated in the accompanying text.

The main difference between sequential art and illustration is that illustration can be a form of sequential art; but sequential art can also encompass other areas too. We say ‘can be’ as not all illustrations are necessarily following a sequential format. For example, when creating a comic book and graphic novel you are indeed using illustration as the medium to tell your story. However, illustration is also used in other formats where it can be a standalone drawing to give further clarity to a piece of text. In the second example, it’s not telling a full story but instead a single piece of information and therefore is not considered to be sequential art. 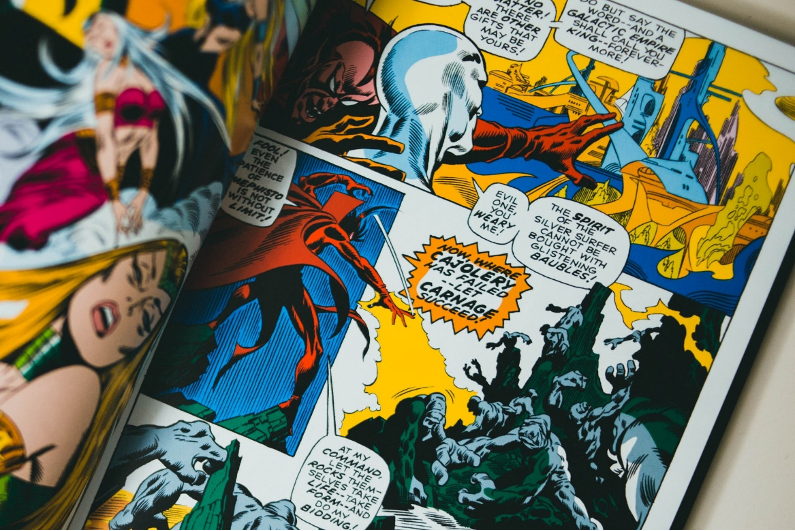 Do you have a passion for comic books or graphic novels and want to become an expert in this field? Or maybe you want to learn the art of storyboarding which has many applications in the modern creative fields… Why not check out our introductory course in sequential art and design?

This five-day online course was designed to teach students the full process of creating sequential art, from concept to publication. Why not give it a try and add some fun new pieces to your portfolio!

You may have thought sequential art was just a more technical way to say comic book but hopefully after reading this you can see that sequential art is in fact an art practice rich in history. One that has followed the human race all the way from prehistoric times living in caves… Sequential art has remained a go to when it comes to visual expression even today, what an exciting practice to be a part of and carry on the tradition!

Take My Sequential Art Skills to the Next Level