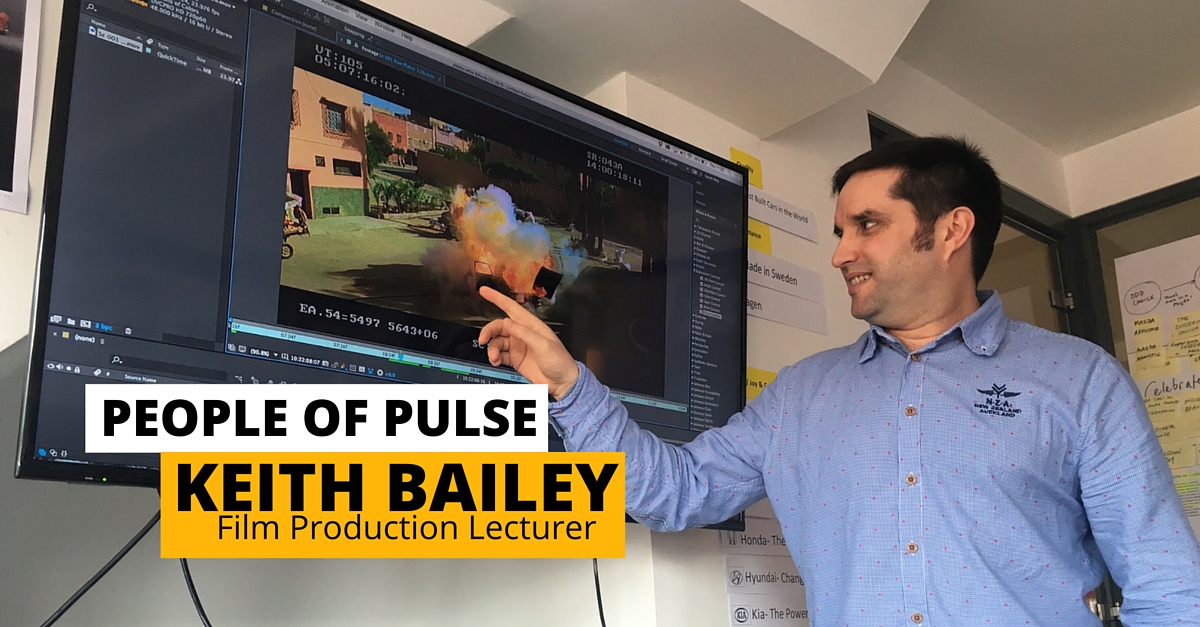 Keith Bailey is a busy man and a quick glance at his CV shows that he has swapped through an impressive array of successful technical careers in the same way that others might change coffee brands! His professional experience ranges from securing a PhD in the Aerodynamics of International America’s Cup Class yachts, through to being sponsored by Apple to become a Apple Master Trainer.

Over the years he’s worked on a wide variety of video production projects, both here in Ireland and overseas – he has also swapped continents, having been born in New Zealand, he now has a vibrant video and graphics training and consultancy business in Northern Ireland, called Taught Media, where he works with organisations like the HSE, the US Army, Food Standards Agency, Ryanair, the Gardai and others.

One constant throughout his career though has been a love of film and it’s over five years now since he started lecturing film courses in Dublin, at Pulse College. He describes his approach to teaching and the industry standard software tools that the students need familiarise themselves with….

What do you teach film students at Pulse Keith?

Well I teach applications technology on pretty much all of the film production courses – the short courses, like Final Cut Pro,  are each focused on one specific aspect of film production, the film production Diploma gives a strong introduction on all aspects of production and the BA, done in conjunction with Griffith College over 3 years, really gears students up to work professionally in the industry.

Why Pulse College for Film Production?

Pulse College is a really creative environment and the students feed off that. Also the college has invested in iMacs stations for each student – the most up-to-date software is available on each machine; that’s handy; some tools don’t work on a PC and its messy if you have to keep changing equipment. For students doing the BA, one of the best things about the course is that it teaches you all of the three industry standard editing tools – Adobe Premiere Pro, Avid Media Composer and Apple  Final Cut Pro – this really improves your chances of getting work later as different TV and media channels use different tools; so you’re opening up opportunities for employment.

What’s the best way to get into film production?

It’s essential to get to know the industry-standard tools so a film production course is the first step.  I’m a big believer in “try before you buy” – go to the open days at Pulse or sign up for one of the intro courses – they’re a great way to get introduced to the tools, production workflows, and components of film production without making a significant time or financial commitment. Some students will find it’s just not for them while others love the work.

Finally, Great Film Production – is it about Creativity or Technology?

Well you know it really is a blend of both! The tools are useless unless you have the ideas. You need to put time into planning, having a strong idea, doing the storyboard and scripting it and you have to know the software to be an efficient editor.  If there’s one thing students should consider, it’s “working smart”. I know it’s a cliché but you need to plan for change; if the producer decides to take out a scene one day, don’t delete it! They may well want it back the next day – you need to plan for change and try to avoid circuitous workflows. Ultimately by mastering post-production software editing becomes more about the craft than the mechanics.

Check out our renowned film courses available or speak to us at an open day to see the College, the equipment available and meet some of the team.