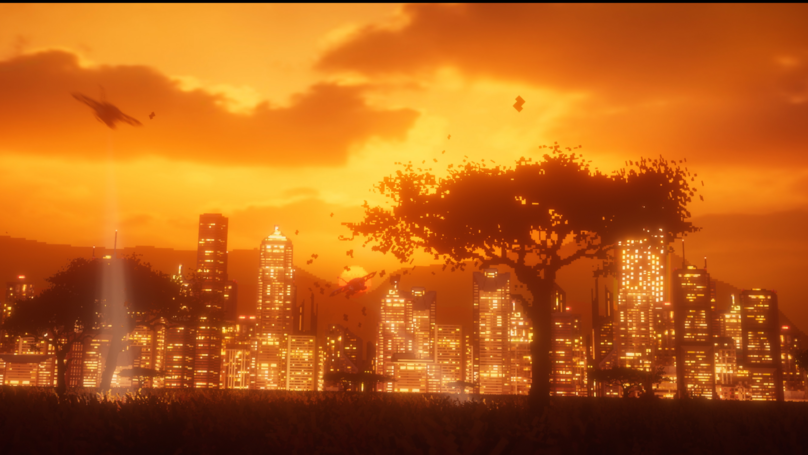 The Last Night, one of the most hotly awaited games of the year, was originally created by two brothers at a Game Jam back in 2014. Tim and Adrian Soret spent six days at a cyberpunk-themed game jam designing a developing a very early version of the game.

In fact, it was so good the game snatched first place out of 265 games created at the jam and a new souped-up version of the game is being produced by Swedish publishers Raw Fury!!!

The game was described as having the feel of Blade Runner with heavy influences from early 90’s games Another World and Flashback.

Premise of the Game

You immerse yourself in a futuristic world that has been heavily affected by augmented reality and  packed full of danger. Taking over the role of a character called ‘Charlie’ who has become disheartened with the world around him you set off on your journey…..

The game looks stunning and visually very interesting as the depth in light and texture are carefully blended to create the atmosphere for the game.

Developer Tim Soret said in a recent interview at E3 “I wanted to create a glorified game, in a way,” “It’s like the old games as you remember them, not as how they really are. Imagination makes everything better than it actually was.”

Check out the trailer here……

Inspired by The Matrix

Tim, described how it was this famous and moody sequence from the Matrix that gave him the inspiration for creating the game. He started by mocking up a version of the shot to see if it would work…..

The game designers only had six days in total to create the game, so they keep things simple with low resolutions pixel art, basic characters and keep the frames of animation to a minimum wherever possible. Adrian focused on the art work and Tim concentrated on the development and coding the game as quickly as possible.

When the brothers were coming up with ideas for the game they used things from the world around them. For example, the name of the train station in this clip is ‘Bussy’…. It’s a station close to where they grew up and were familiar with – spending plenty of time there waiting on trains over the years!

To speed up the development process they created lots of neon signs and dotted them around the background of the game – keep your eyes open for them when you’re playing it…..

If you haven’t tried it yet you can still play the original game online!

We love a good game jam and this story goes to show that anything is possible. Over the last couple of years, we’ve seen tonnes of top games coming out of our jams. If you’re interested in game development or game design they’re a great way to meet up with some like minded people to hammer out a few ideas and create something magical!

Drop along to an open day here at Pulse College and have a chat with our team if you’d like to learn more.