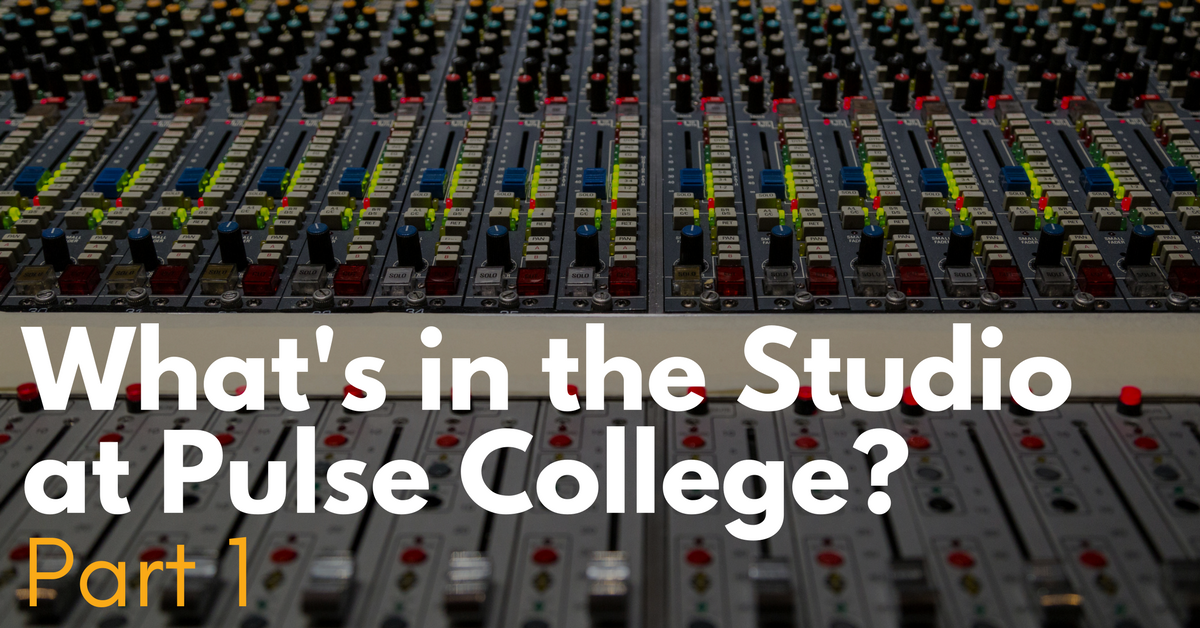 This article is part one of a two-part mini-series in conjunction with our friends at Windmill Lane Recording Studios. They’re going to give us the low down on the recording equipment available in the studio for students at Pulse College on our Music Production and Music Technology programmes.

One of the best things about Pulse College is that it’s located at the world-renowned Windmill Lane Recording Studios. The number of amazing artists to record there is literally insane! If you want to have your mind blown take a look at the clients for yourself (disclaimer – we are not responsible for any exploding minds!).

What attracts all these clients to the studio? Well there’s several factors involved. Dublin is a great city and it has a rich history of music and the arts and these studios have become famous for creating killer records since 1978 – so the reputation really helps attract world class talent. On top of that, the studios stellar line-up of recording equipment has been a major contributing factor to its success.

Many artists walk in and literally start drooling!! There’s hundreds of gadgets to play with and the acoustics in the live rooms are second to none. We’re going to give you a quick overview of 4 bits of kit that set the studio apart from others.

Let’s step inside for a closer look.

“Neve consoles are the Rolls Royce of the industry. When it comes down to it, the Neve has the edge on any other”. Sir George Martin

Studio One has been built around the AMS Neve VR Legend. Neve have built up a reputation for creating some of the best high-end studio equipment money can buy. The company was founded in 1961 and their gear has been used to record many of the most iconic tracks ever produced.

Windmill Lane Recording Studio One has the capacity to record a full orchestra. For any studio to do that, a desk with a large number of tracks is essential, and that is where the 72 track Neve Legend rules supreme. This desk has lots of nice features including; improved metering that maximises the headroom, in-line monitoring, a flexible EQ and filtering section and surround sound monitoring – to name but a few!

The desk is famous for its first-class circuitry that can capture unreal recordings.

If you’re into playing piano or recording piano then you’ll definitely be familiar with the name Steinway & Sons. This Steinway Grand Piano takes pride of place in the centre of Windmill Lane Recording Studio One and everyone who walks through Studio One, from Keith Richards to Lady Gaga, can’t resist sitting down to tap out a few notes.

The 1,500 sq ft studio has been acoustically treated and when mic’d up properly the Grand will knock your socks off!

The Hammond Organ was created back in the 1930’s by Laurens Hammond and John Hanert and since then has been a popular instrument for adding colour to tracks in nearly every genre of music. The Hammond has two keyboards, one on top of the other, and essentially played in the same was as a piano. When you press a key on the organ the sound is continuous unlike a piano where it drops away.

The Hammond has a pedal board which controls the volume of the notes and drawbars which vary their tone. Many musicians like to pair the organ with a Leslie Speaker and we have one of these in the studio. The Leslie is a rotating speaker and can create a doppler effect which is quite unique.

The most important tool an audio engineer has is their ears, and a good set of monitors of course! We’ve installed the Genelec 1039a Speakers in Studio One as they are ideally suited for monitoring in the control room. They’ve an excellent response and create a stable and neutral sound for playback. Equipped with a three-channel power amp that can produce up to 126 dB these bad boys can seriously pack a punch when they have to!

We can’t blame you! Make sure to check out Part 2 of the blog series by clicking here.

The best thing about being a student at Pulse College is that all this top recording equipment is right at your fingertips! When you’ve finished your Music Technology Degree at Pulse College you’ll be comfortable walking into any studio in the world.

If you want to find out more please contact us or come along to an open day and have a look around for yourself.